This is the first work of Vingroup group in Quang Ninh.

Vincom Trade Center Project Center was launched from, 11-2013, the Royal style design in Europe. Vincom Center Halong has an area of over 37,000 m2 floor, including the basement and 4 floating floor 1, with items such as: high-end shopping center; Shopping Center chain, education consultant, dedicated to child health; Food Court, ice-skating; theaters, the World game …. This is the largest trade centre in Quang Ninh province and stature in the North until this point. 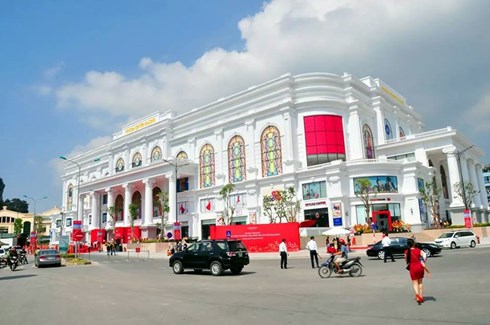 Panorama of the Vincom Trade Center in HA Long

Speaking at the opening ceremony, leaders of the PEOPLE’S COMMITTEE of Quang Ninh province appreciated the efforts of the Vingroup when in less than 11 months have quickly works great stature in the northern region. Get this result is thanks to the efforts of the entire team of engineers, workers, contractors, which can not mention the important role of the M&E Group in the design installation of refrigeration systems, ventilation for buildings, contributing to improving the project on schedule.

Bringing Vincom Center Halong operational is a major event of Halong city, private works with architecture, the existence of Vincom Center Ha Long will become the focal point in the center of the town of HA Long at the same time will form a complex of services, a tourism product, destination can not miss when you come to the Quang Ninh.

Chairman of the Quang Ninh provincial people’s Committee also affirmed the province Quang Ninh continuing commitment to leadership, directed more strongly improved investment environment of the province. That will create the best conditions for businesses, entrepreneurs have real potential as Vingroup corporations maximize the talent, intelligence and capacity to enrich his business on a legitimate Phenomenon. People to the shops in the Centre of Vincom Halong

As for the Vingroup group, the opening of the Vincom Center Halong is a very meaningful events important to the development of the group in the expansion of the retail market in the provinces. Along with the success of Vincom Center, Vingroup Corporation look forward to more great projects of the Group continue to be implemented, contribute to build on a rich Quang Ninh, more beautiful.